Parallel Times is Norfolk’s Blondie tribute band featuring Julie Bunn as Debbie Harry. Already a renown solo artist, Julie has been performing Blondie hits to live audiences since 2008. Now she is backed by experienced musicians, Parallel Times, who have not only performed as a group but as individuals in a wide variety of bands over many years.

Together they create a powerful and authentic Blondie sound, with very strong performances from Julie as Debbie Harry and enthusiastic support from the band. They offer an exciting and dynamic live show lasting approximately 90 minutes, which can be performed as two sets or one continuous performance. They can also play a more general (ie non Blondie) set of party music or specific sets for 70’s or 80’s theme nights.

The band are available to hire for private parties, festivals, theme and tribute nights, weddings and will perform at charity fundraising events. They come with a complete set, including PA, lighting and backdrop, but are happy to use in-house sound and lighting if preferred..

The band also appear as the JB Band when performing mainly non Blondie songs. See the Set List section of the web site. 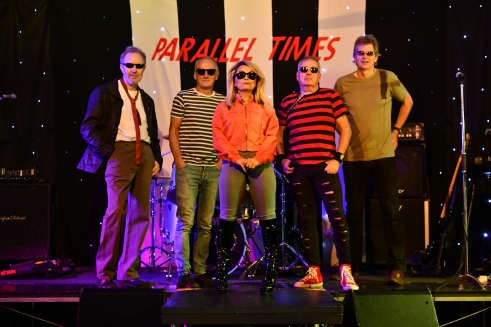 Some quotes from recent appearances

Kimble Reynolds – organiser of Bands of Hope and Glory, a charity event on 7th August 2016 at Sparrows Nest Gardens in Lowestoft for East Coast Hospice and Hospital Radio Yare…..”Your set (Parallel Times) was great on Sunday. We had in excess of one thousand five hundred people watching you. I cannot thank you enough. Each year things get better and better.”

Jeanette Feneron – Banningham Crown (24th July 2016) – “We had a wonderful afternoon in the sunshine listening and dancing to the JB Band. Customers commented on how enjoyable the whole afternoon was. Great music and the repertoire was just perfect. Will definitely book again and would recommend to anybody”

“There were so many musical high points and highlights of the (Reepham Festival) weekend that it would take a lot of e-mail space to list them all.  So I will just mention one, that began as a potential disaster and instead became a victory snatched from the jaws of defeat when, on the Sunday afternoon, the greater Reepham area suffered a major power cut……..Parallel Times then went on to perform their whole set with a ‘skeleton’ PA set-up, prior to full power being restored – and a fine job they did of it too.”

Sue Winter – Manager of Star Inn, Lessingham (15th August 2014)
Your band was truly fantastic. Thank you. All I heard was praises from my customers. I will highly recommend you to everyone. Just brilliant and well done!

Thank you for a brilliant night at the Doghouse (5th April 2014).  Your performance certainly exceeded all expectations and was thoroughly enjoyed by all.  I still have “Atomic” playing in my head!  It was a great set.  Also, thank you again for supporting the St. Andrews School Charity and for helping to raise awareness of Autism. Finally, we have collated some comments on the night….

Being a long time Blondie fan I was blown away by how great Parallel Times were live. A thoroughly enjoyable night spent bopping away on the dance floor, and for such a good cause. I would love to go and see these guys again and will be looking out for them in future.  Cara Nash, Norwich

Parallel Times are a fabulous band. The performance instantly got the crowd going from the very first song. All the Blondie classics were performed with great style, energy and authenticity. Julie Bunn the lead singer was superb and we were all so thrilled with the support the band generated for our special cause. Parallel Times are a class act and I’d highly recommend them for parties or functions anybody was planning. Rachael Laurie, Norwich

….for a tribute act, they were the most polished tribute act I have seen, you could have easily closed your eyes and thought Blondie were performing live in the Doghouse! Neil Batchelor, Norwich

I thought Parallel Times were top notch and really hit the mark. Julie had Debbie Harry down to a t – she had the crowd going right from the off which doesn’t always happen at things like that, sometimes it takes a few numbers to get things going but it was tops right from the start. Nick Bowler, Norwich

” A real professional act that appealed to Blondie fans both old and new”.
Michael Cox – Overstrand Rockstock 2013 Organiser
Nora Gaston, the Artistic Director for the Belfry Arts Centre said…”We had a wonderful evening the night Parallel Times got everyone up dancing! We raised money as well, which was great. The band is so good and Julie, the lead singer, had us all singing, while fascinating  us with her change of costume, remembering the elegance of a  lost era.”